The Mini Cooper may look small on the outside, but it’s big on active safety and performance driving. Refreshed for 2022, the Mini Cooper gets new design changes to its front grille and bumpers. In addition, it has a larger 8.8 touchscreen infotainment display, satellite radio, new colors, and safety features.

Out of the 200 or more new vehicles I test-drive each year, the Mini Cooper S stands out as one of my favorites because of its ability to maneuver through traffic and Urban streets. It has a go-cart feel that gives me a sense of control and the confidence to avoid the many road hazards and other drivers.

Due to its smaller size and racing character, the Mini was featured in numerous classic movies like The Italian Job, Mr. Bean, The Bourne Identity, Austin Powers in Goldmember, and many others.

The 2022 Mini Cooper line-up offers two- and four-door, a convertible, and an electric Mini Cooper SE model. I got into the 2022 Mini Cooper S Hardtop two-door with the Signature package for a week, which came with many luxury features and six-color ambient lighting that brightened up the interior.

The Cooper S, powered by a 2.0-liter four-cylinder twin-turbo, generates 189 horsepower and 207 lb-ft of torque. It has three different driving modes, including Sport for maximum exhilaration, Mid Mode for everyday driving, and Green to regulate fuel efficiency.

Transmission options include a six-speed manual, a seven-speed dual-clutch automatic, or an eight-speed automatic. All models are front-wheel drive. 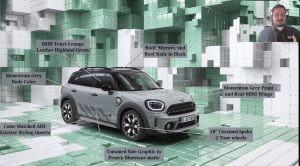 To celebrate its 20th year in the U.S., Mini recently announced the launch of three Special-Edition Coopers, called Resolute, Untamed and Untold. The 2023 Cooper, Clubman, and Countryman models can be custom ordered with bolder designs, with brass and bronze trimming.

The Cooper hardtop and convertible offer the Resolute with Rebel Green and Pepper White paint. The convertible comes with a black cloth top. In addition, the Cooper SE electric can be ordered in Special Edition.

The Countryman and Clubman offer other unique colors, designs, and features. Depending on your location, ordering time may average about three months to receive a customized Special Edition model.

Production begins in March 2022, and sales will start on the East Coast in April and on the West coast about one month later.

For a complimentary subscription to the latest car and truck reviews, visit www.decisivemedia.net. Review by Randi Payton, Decisive Media Network.