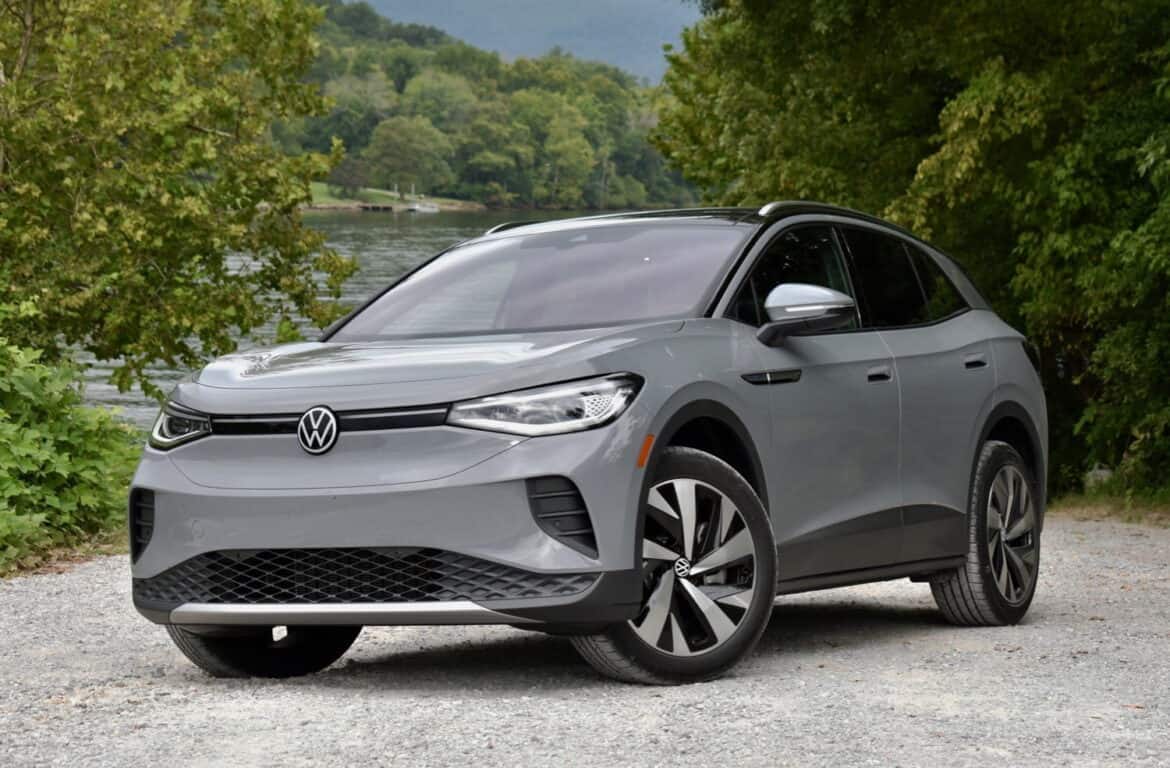 The arrival of the Volkswagen ID.4 in 2021 introduces fun-to-drive and more style to the all-electric SUV segment. Yet, there are a few things you need to know if you want to have fun driving an adult toy to drive around the streets and not have to buy gas.

As more vehicles transition from gasoline to electric power, the first thing you need to know is how to buy an all-electric SUV that matches your needs. It’s not simply picking a vehicle from a company that receives lots of press coverage, like Tesla, Toyota, or Ford. There’s more to it than the mileage range and lowest price.

It seems that Volkswagen took many of those factors into account before launching the 2021 ID.4 SUV, which began the German automaker’s long-term strategy to introduce a lineup of affordable, mass-market electrified vehicles in the U.S.

The 2022 V.W. ID.4 is priced lower than many competitors, charges fast, and has a battery range of 260 miles. It is also beautiful and spacious inside, with a starting price from $39,995 to $44,495 MSRP, making it an ideal choice for families on a budget.

Power: The base Pro, 1st Edition, and Pro S RWD versions produce 201 horsepower from a single electric motor, while the available AWD models with the dual-motor get 295 and 339 pound-feet of torque.

Electric Range: The ID.4’s 77kWh battery holds enough energy to drive 260 miles on a full charge and takes less than an hour to recharge. Depending on the type of charger, it can take 38 minutes to get up to 80% charge on a 150-kW D.C. fast charger. VW partnered with Electrify America to provide owners with home chargers and free unlimited charging at Electrify America charging stations.

Although the second electric motor uses more energy, it sends more power to the front axle and increases traction and speed, adding 107 horses and 110 pound-feet of torque. Unfortunately, it also drops the electric range on the Pro AWD down to 249 on a full charge and the Pro S to 240 MPGe.

The new Volkswagen ID.4 has a smooth, slick-looking design and unique paint colors that make it look animated. It is comfortable inside and equipped with many high-tech features, including ambient lighting, a 10-inch infotainment touchscreen, partially powered adjustable front seats with heating, dual-zone automatic climate control, front/rear parking sensors, and a digital driver’s display. Other standard features include navigation, a 5.3-inch reconfigurable digital gauge display with voice recognition, Apple CarPlay, and Android Auto.

Fuel Economy: Still called fuel economy, the EPA rates the ID.4 Pro at 107 MPGe city/91 highway, while the 1ST Edition and Pro S are rated at 104 MPGe city/89 highway. The main advantage of owning an electric vehicle is not worrying about fuel costs. 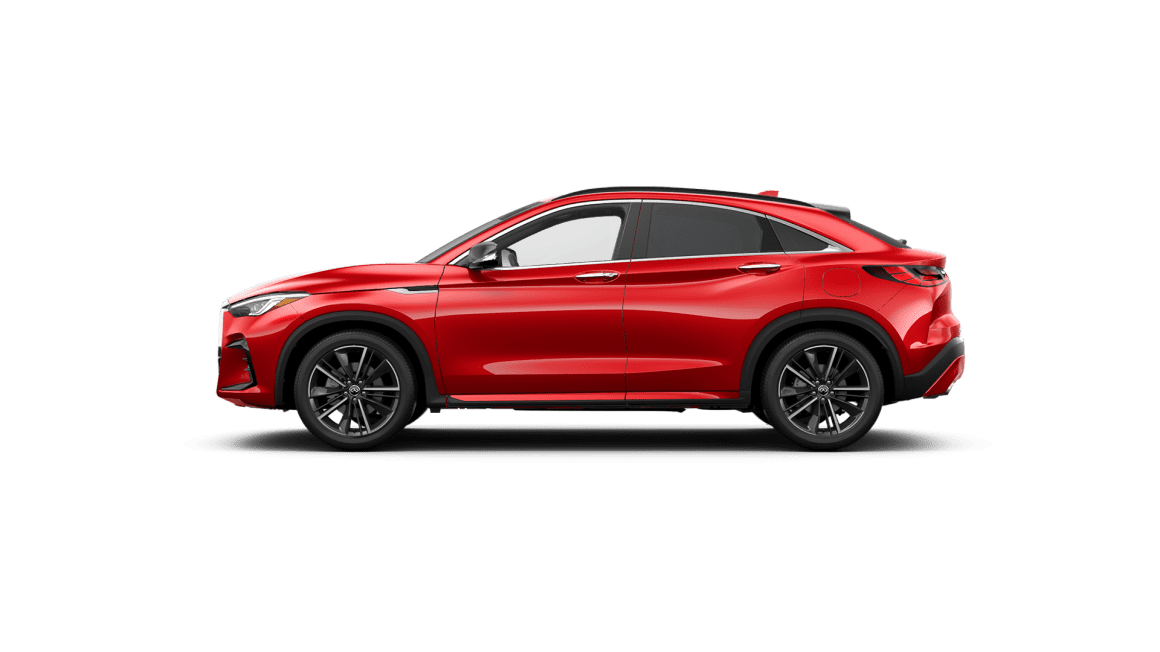 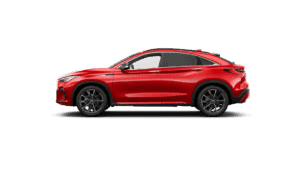 Making its case for ultimate luxury and vehicle design, the all-new 2022 Infiniti QX55, has an aggressive body style, sporty performance, along with 20-inch wheels. More stylish than the FX it replaces, the QX55 is positioned between the Infiniti QX50 compact and the QX60 crossover and comes with an all-wheel-drive (AWD) system.

The Infiniti QX55 follows the tradition of its predecessor, the Infiniti FX, which launched in 2003 as one of the first performance-based sport utility crossovers in the market.

The 2022 Infiniti QX55 is built on the same platform as the QX50 and powered by the same variable-compression 2.0-liter turbocharged I-4 engine. However, the QX55 has a unique style, a lower roofline, a bold front grille, larger wheels, and higher-quality luxury materials. Top-of-line trims offer wood grain, leather seats, and a Bose audio system.

The QX55 Luxe comes with many standard features like a leather steering wheel, moonroof, blind-spot monitoring, and a power liftgate. In addition, the Essential adds power mirrors, a heated steering wheel, and navigation, while the Sensory includes a heads-up display and Infiniti’s ProPilot Driver Assistance system.

Power: The QX55 generates 268 horsepower and 280-pound feet of torque from a turbocharged 2.0-liter four-cylinder engine. All models come with all-wheel drive and an eight-speed Continuously Variable Transmission (CVT).

The Infiniti QX55 has several driving modes: Standard, Eco, Sport, and Personal. The Personal mode programs the engine, transmission, and steering to match the driver’s preference. 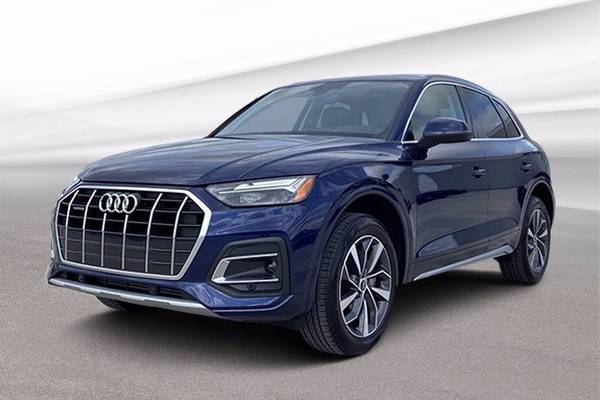 The 2021 Audi Q5 is Lux On Wheels and Versatile 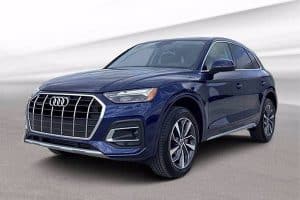 The 2021 Audi Q5 has options for anyone looking for a premium luxury all-wheel-drive SUV with a comprehensive suite of standard features. For the 2021 model year, the Q5 added more standard features, updated the design, and launched a Sportback performance model.

The Q5 45 Premium Plus model I tested was powerful, smooth, and exceptionally quiet inside the cabin. Riding on 19-inch wheels, the Premium Plus model took on rough city roads and was stress-free during highway commutes. In addition, the contour leather seats with thigh support and ventilation were comfortable.

The Premium Plus adds more standard features than the base model and fits in the middle of the Q5 family. It includes a 12.3-inch digital gauge cluster, sport seats, a 19-speaker Bang & Olufsen sound system, more cameras, and a panoramic sunroof. In addition, all models come with a 10.1-inch infotainment display and Audi’s exclusive software.

Power: The base 2021 Audi Q5 has a four-cylinder turbo that generates 261 horsepower, paired with a seven-speed automatic transmission. The plug-in hybrid increases horsepower to 362 with 369-lb ft of torque. The Q5 Sportback is powered by the same 261 horsepower engine, while the SQ5 Sportback gets 349 horses from a 3.0-liter six-cylinder.

Fuel Economy: EPA estimates for the 2021 Q5 range from 23 city/28 highway mpg. The plug-in hybrid gets a combined 27 mpg with an electric range of 19 miles. 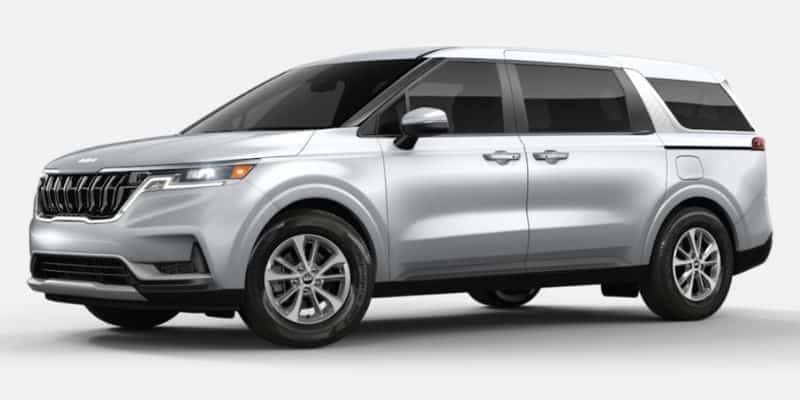 Kia Intensifies the Competition with Sorento, K5, and Carnival

Kia Motor Company, South Korea’s second-largest automobile manufacturer, is now a force to be reckoned with worldwide, with a full lineup of SUVs, sedans, and a minivan. Once a bland maker of economy vehicles, Kia competes with popular and European cars with advanced technology, designs, fuel economy, and performance.

Despite sharing the same corporate relationship, platforms, and engines with Hyundai Motor Company, Kia has introduced a slew of new models with a unique character that distinguishes them from other brands.

I recently tested three Kia models, including the redesigned 2021 Kia Sorento Hybrid SUV, the new 2021 K5 sedan, and the all-new 2022 Carnival minivan. All of them were highly impressive and significantly different than their predecessors. 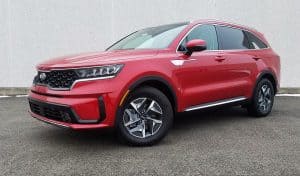 The 2021 Sorento Hybrid is Kia’s first electric-backed mid-size crossover. It gets 225 horsepower from a 1.6-liter turbocharged four-cylinder engine that generates 177.2 horsepower and an electric motor that adds another 60.1 horses.

Kia mated the engine with the electric motor and a 1.5-kWh lithium battery that aids in producing more torque off the line and the ability to coast at highway speeds with the engine off, significantly improving the driving range on a tank of gas.

The top-of-line Sorento X-Line AWD ($42,590 MSRP) comes with multiple luxury features, including 20-inch wheels, leather trim, a 12.3 instrument display, and more. In 2022, the Sorento will offer all-wheel drive in the same price range. Next year, Kia will introduce a plug-in hybrid for about $10,000 more.

The all-new 2021 Kia K5 replaces the Optima, launched ten years ago. The K5 was reengineered to compete with popular mid-size sedans, while the K5 GT performance model goes up against German luxury brands, like Audi, BMW, and Mercedes, but at a lower price.

The K5 expects to continue the strong growth that Optima started. However, it faces tough competition from Toyota Camry, Honda Accord, Nissan Altima, Chevrolet Malibu, Hyundai Sonata, Mazda 6, Subaru Legacy, and the Volkswagen Passat. In addition, the K5 GT performance model is going after BMW 330i and Audi A4 customers in a more aggressive move.

Power: The Kia K5 offers an option between two engines: They include a 1.6-liter four-cylinder turbo producing 180 horsepower at 195 lb-ft of torque or a 2.5-liter inline-four turbo that gets 290 horses at 311 lb-ft of torque. 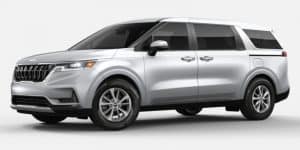 The all-new 2022 Kia Carnival, which replaces the Sedona MPV/minivan, radically departs from the usual minivan expectations. Instead, the new Carnival is an MPV/minivan that outdoes many SUVs in features, performance, and innovations. Plus, it looks more like an SUV than a minivan in many respects.

The Carnival is mighty and has a great sense of control on highway and city roads. It shares the same platform as the new K5 sedan, which includes ultra-high-strength steel, making it stronger, quieter, lighter, and stronger than its predecessor. The Carnival seats seven to eight occupants in has class-leading interior room and comes loaded with standard advanced technology and safety features.

Power: The Kia Carnival tops the segment with a 290 horsepower, 3.5-liter six-cylinder engine.

Fuel Economy: The EPA rating is 19 city/26 highway mpg. Kia plans to introduce a Carnival hybrid in late 2022 and an all-electric model in the following year.