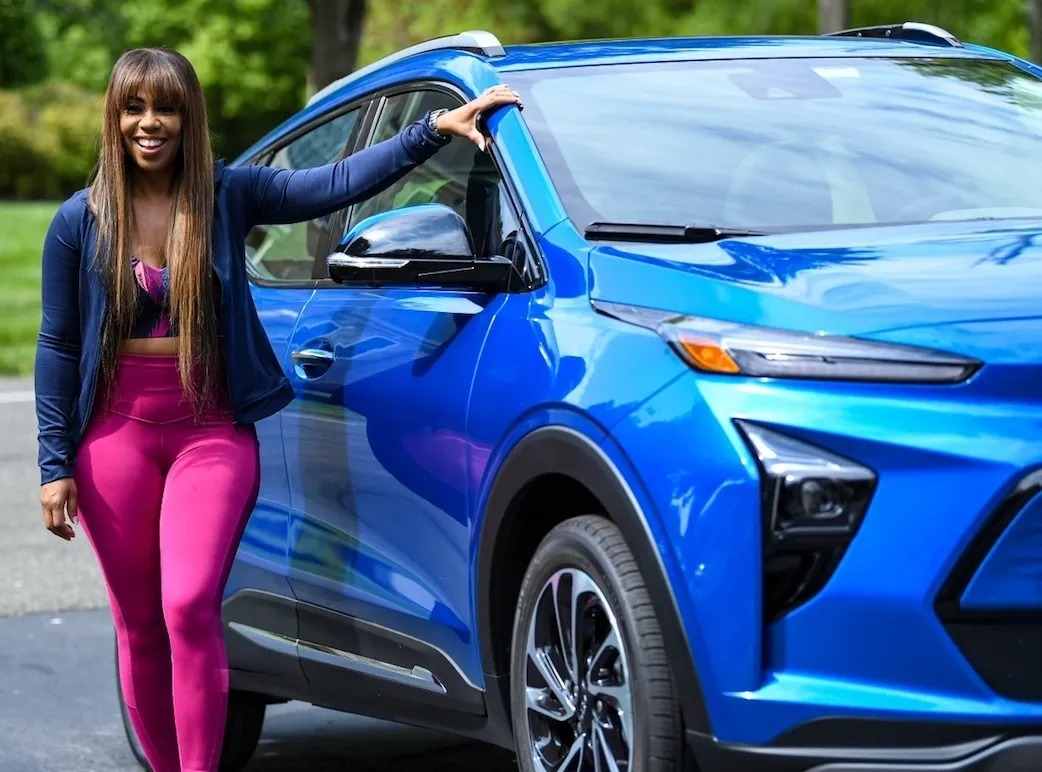 The allure of electric vehicles (EVs) is that we have to expedite their evolution if humanity envisions a cleaner, greener, and prosperous future in terms of renewable resources. So auto brands, including General Motors (GM), have made concerted efforts to tackle the challenge. For instance, as part of GM’s “All-Electric Future,” the newly-released Chevy Bolt EUV is an affordable, long-range EV key to GM’s plan to launch 30 new EVs globally within the next five years.

Correspondingly, in a direct effort to introduce EVs to the urban market, we connected with Tressa “Azarel” Smallwood as she gave Automotive Rhythms insight into her world of film production. The award-winning book publisher, movie producer, and founder of MegaMind Media profiled her typical day behind the lens by way of the 2022 Chevy Bolt EUV Premier and its electric energy flow. After spending two weeks with both the Bolt EV and Bolt EUV, the content creator was stoked on the pair’s capabilities and how fluid EV’s mesh with her lifestyle.

“Over and above, we want the Earth to thrive so our kids can continue to enjoy the beauty of life and not have to worry about Global Warming,” Tressa emphasized.

To capture the effectiveness of her visceral emotions driving the Chevy crossover vehicle, ARtv filmed Tressa’s array of activities, from self-care with Julie Thi of Lash Moi to meeting up with girlfriend and coworker Maggy François. Tressa specifically enjoyed the Super Cruise feature while regenerating energy with a green smoothie during a hands-free drive on Route 50 East in Bowie, MD. Actually, the Bolt EUV is the first Chevrolet and GM EV to offer Super Cruise, a hands-free driver assistance system for enabled roads. “How cool is this,” she exclaimed after witnessing the vehicle maintain speed and steer on its own with the system activated.

“The new Bolt EUV is the best of the Bolt EV packaged in an SUV-like vehicle with more technology and features, giving customers more choices and reasons to switch to electric,” said Steve Hill, vice president of Chevrolet. “This is an opportunity for Chevy to capitalize on the success we’ve built with the Bolt EV and bring new customers into the Chevy family.”

Data conveys that women majorly spearhead the decision-making in households when it comes to auto purchasing. Moreover, affordability is critical to mass marketing EVs, especially to African American auto buyers. No problem, as the Bolt EUV starts at $33,995. MegaMind Media specializes in creating compelling original content for female audiences; therefore, the collaboration was perfect.

Tressa turned her debut bestseller into a multi-million-dollar publishing company with more than 162 titles that have amazed thousands of fans worldwide. In addition, she has produced films such as Secrets, Holiday Heartbreak, All In, and The Available Wife. An advocate for women’s issues, Tressa recently partnered with BET Her to produce The Waiting Room and The Couch, a series highlighting mental health and breast cancer awareness. And while bringing beloved actors like Lamman Rucker, LisaRaye McCoy, Sheryl Lee Ralph, KJ Smith, Clifton Powell, and more to the big screen, she is doing her part to revive the creative economy by employing hundreds of independent artists and entrepreneurs. Her films have also given unprecedented opportunities for noteworthy actors like Vivica Fox, Vanessa Bell Calloway, Victoria Rowell, and Kim Fields to step behind the camera as directors paving deeper pathways towards diversity.

After leaving home in Upper Marlboro, Tressa was ecstatic over the scintillating electric torque that allowed the Bolt EUV to fly in silence with the wind, especially when set in Sport Mode. In addition, the efficient ride is blessed with a 10.2” Chevrolet touchscreen infotainment system, wireless Apple CarPlay, a wireless charging pad, a Bose 7-speaker audio system, WiFi, a split panoramic sunroof, embedded navigation, ventilated front seats, rear camera mirror, and heated (outboard) rear seats with 3” more rear-legroom compared to the Bolt EV. For sure, her passengers enjoyed the added comfort.

“I’m constantly curating new content for streaming platforms and cable channels, so a vehicle with an array of amenities is important for me to ideate new storylines,” she continued.

No worries about running out of juice either, as the Bolt EUV’s EPA battery range is an estimated 249 miles on a full charge. Which means she was good to go for a week of driving activities around the way. It’s electric energy people, using Chevy’s proven battery and drive unit technology. To re-up on the fly, we stopped at EVgo’s charging station in the Bowie Town Center while Tressa ran some errands.

The loving wife and mother also requires safety in her ride. Fair enough, because the Bolt EUV features Chevy Safety Assist, Automatic Emergency braking, Front Pedestrian Braking, Forward Collision Alert, Adaptive Cruise Control, and much more. All in all, it was an amazing and educating experience with the rising film star and the Bolt EUV. Next up was a return trip home to wrap up.

“I’m big on recouping energy from my husband and kids and destressing after a long day,” she accentuated. Time to kick back, love and laugh. “Thank you, Chevrolet for the integration, and let’s all continue to respect the planet with clean, green energy.”  What a poignant ending to a new beginning!

Did the New Genesis GV80 SUV Save Tiger Woods?

According to safety experts, the all-new 2021 Genesis GV80 SUV may have saved the golfer’s life in February despite the suspected human error. The GV80 that Tiger Woods was driving at the time of his crash was recently named a top pick by the Insurance Institute for Highway Safety (IIHS), scoring high marks for “crashworthiness and crash prevention capability.”

The new GV80 is equipped with the latest advanced safety technologies, making it difficult to crash or even fall to sleep at the wheel. Analysis of the vehicle’s “black box” revealed the SUV was going about 87 mph on a 45-mph downhill curve when it lost control, and Woods stepped on the gas pedal instead of the brakes.

The Genesis GV80, newly introduced in November 2020 for the 2021 model year, was found by the IIHS to be one of the safest mid-size SUVs in its class. A crash of that nature in another vehicle may have been deadly, according to the local police.

Some of the latest safety equipment in the new Genesis GV80 includes:

Ten airbags – including driver-side knee and an airbag that deploys in the center of the vehicle; an advanced driver assistance system that helps avoid accidents through stability control, evasive steering, distracted driver alert, and interior camera. In addition, a safety cage made from high-strength steel gives added protection to passengers.

The European-like design and premium appeal of Genesis models have been attracting luxury consumers to the brand. The enchanting GV80 not only looks luxurious but comes loaded with standard features and technology at a lower price point than many competitors like the BMW X5, Mercedes-Benz GLE-Class, Audi Q8, Volvo XC90, Jaguar F-Pace, Acura MDX, and Lincoln Aviator. 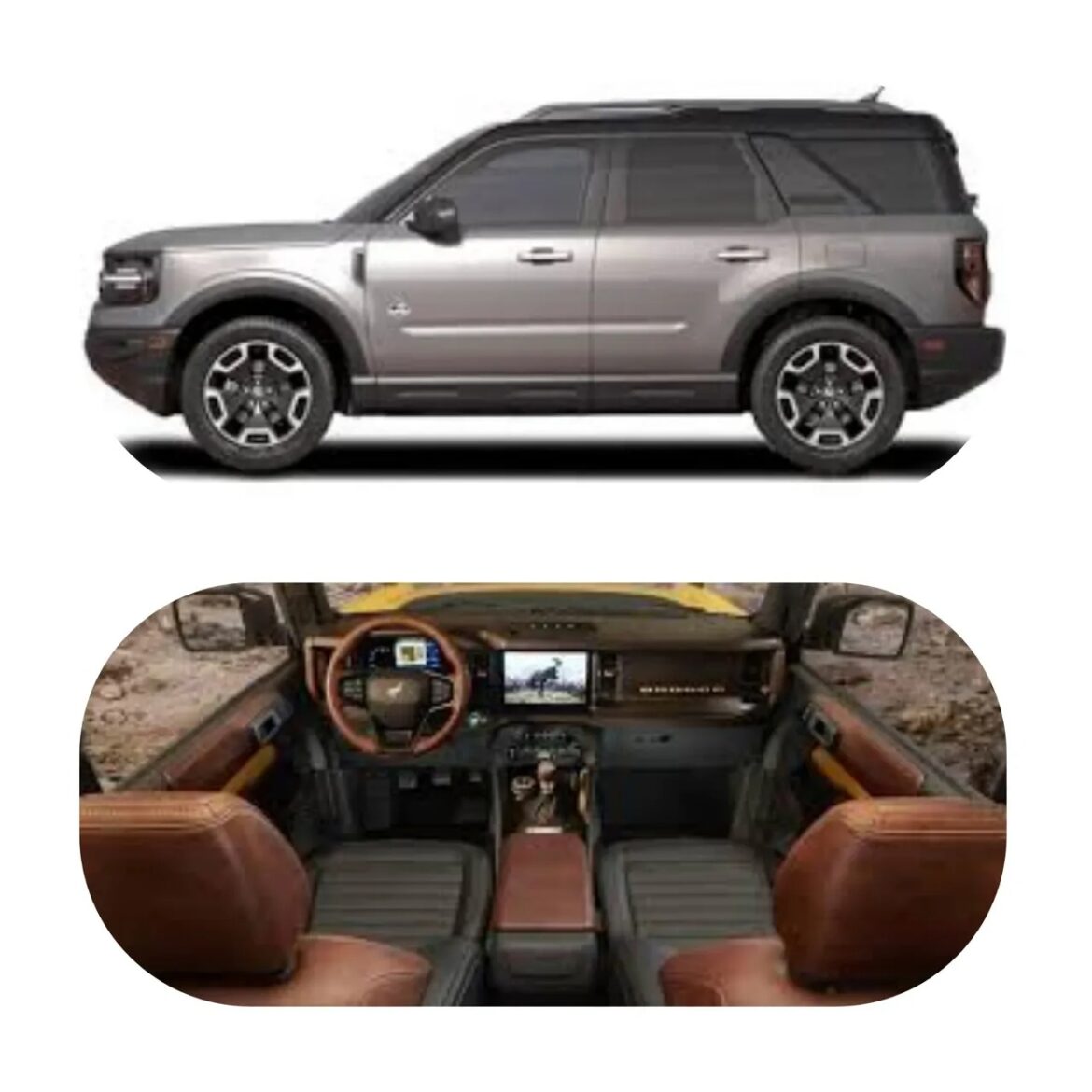 An All-New 2021 Ford Bronco Returns to Reclaim its Fame

Those of you old enough to remember, in 1993, the infamous Ford Bronco was watched by millions around the world during a 90-minute televised police chase of O.J. Simpson. After a 28-year hiatus, the Bronco returns to reclaim its fame.

The legendary Ford Bronco, discontinued in 1996 after a 30-year run, returned in 2021 with a broader assortment of models, including new two- and four-door Bronco SUVs with seven variants and a smaller Ford Bronco Sport in four configurations.

I got a chance to drive the Bronco Sport Badland First Edition around for a week and was impressed by its versatility and performance.  Built on the Ford Escape platform, the Bronco Sport seats five passengers. Like the Jeep, its number one rival, the roof, and doors are removable. In addition, all models come with all-wheel drive (AWD), advanced off-road capabilities, and a choice between two turbocharged engines.

Visually, it has a stylish boxy shape, is loaded with the latest technologies and features on the inside. As a result, there is much more space inside than it appears. The seats will fold up on down to accommodate passengers or for more cargo space.

Despite the difference in style, The Bronco Sport also shares some of the same engine options, transmission, and safety features as the Ford Escape. However, the Bronco is slightly smaller than the Escape and has better off-road abilities than the roomier and lower-priced Escape.

Power/Performance: The Bronco Sport offers two engine options: A 1.5-liter three-cylinder turbo that generates 181 horsepower or a 2-liter four-cylinder turbo Ecoboost engine that gets 245-horsepower. The 2.0-liter comes with paddle shifters, and both engines are mated to an eight-speed automatic transmission.

It also included many of the latest advanced safety assist and features, including Ford’s C0-Pilot 360, front 180-degree camera, reverse sensing. For on- and off-roading, the all-terrain 17-inch tires were optional. 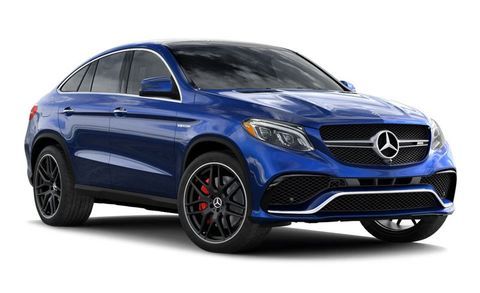 The Mercedes AMG GLE 63 S Coupe joins the high-class SUV category with its aggressive design, super luxury, and a hand-crafted V8 that generates a staggering 603 horsepower. But, starting at a price tag of $116,000 MSRP, is it worth the bucks?

A week-long drive in this super-high SUV convinced me of its superior performance, muscle, and intelligence. Without hesitation, the hand-crafted 4.0-liter turbocharged V8 engine raced from 0 to 60 mph in just 3.7 seconds. The GLE is so powerful and smooth that I had to stay focused on not exceeding speed limits.

There’s no question, the AMG GLE 63 S, was built for the racetrack. Unfortunately, many of its buyers will probably never experience its full potential. However, it is good to know that you have more power and control than most other vehicles on the road. Admittingly, for most people, it’s more of a status symbol than a muscle car.

It is smooth and fast thanks to a mild-hybrid system labeled “EQ Boost.” The 48-volt electric motor replaces a traditional starter and is positioned between the engine and nine-speed transmission to give it an extra 21 horsepower with 184 lb-ft of torque.

The GLE is excellent for cruising along the highway or racing around sharp curves. An active stabilization system prevents roll, and an adaptive damping and air suspension system help increase comfort. Altogether, the combination helps to maintain the balance and command of the road.

The power in the GLE 63 S, managed by advanced computing technology, allows the transmission and steering to adjust to individual driving preferences. They include Comfort, Sport, Sport+, Individual, Race, Trail, and Sand.

When driving in the Comfort mode, the vehicle’s traction and stability interact more to control the CUV. However, operating in the Sports or Racing modes give the driver more freedom to let go.

The GLE comes with a 12.3-inch touchscreen and a 12.3-inch digital instrument cluster. In addition, there are endless ways to customize the interior and mood, including 64-color ambient lighting that allows multiple customization levels.